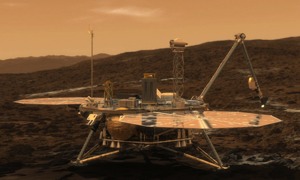 If you Twitter, and don’t follow the Mars Phoenix Lander, you really should. The idea of NASA personifying spacecraft, and interactively talking with people on social networks is FULL of teh awesome.

I am so impressed that NASA has gone so far as to talk about Mars with people in a no nonsense, simple, understandable way. And interactively to boot. Got a question? Just ask. It’s awesome, and I hope NASA gets the praise they deserve for it. Even more than that, however, I hope that the Web 2.0 generation (ha! I’ve forced us into another arbitrary generation!) puts more and more support behind NASA and space exploration.

(Oh, check out @CassiniSaturn too. Anyone know of other twittering spacecraft?)

UPDATE: I just got a hit from someone using a Blackberry and a NASA IP address. I feel shiny. 🙂

6 thoughts on “NASA Is Being Smart, I Like It”