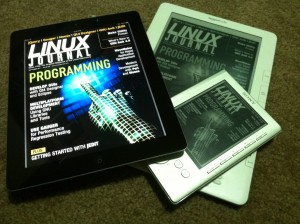 Today, Linux Journal announced something that I’ve known was coming for a while now. We will no longer get that wonderful excitement of finding a good old fashioned paper magazine in our mailbox every month. The good news is that Linux Journal won’t be going away. We’re just switching medium. It’s no longer possible for the company to sustain the cost of printing and shipping a physical magazine every month.

This shouldn’t really come as a shock to anyone, as magazines right and left are either switching to digital, or closing shop altogether. As a tech magazine, I’m quite pleased to see us go for the former instead of slowly and painfully succumbing to the latter. The truth is, I can tell you first hand that Linux Journal is about 2 things: Content and people. And not in that order. With this change, those 2 things will remain at the top of our priority list.

It’s funny, because based on some of the negative feedback we’ve gotten, I suspect people think Linux Journal is a big conglomerate somewhere, and a fat guy smoking a cigar decided to cancel traditional publishing. As if he were sitting on a pile of money, and didn’t want to pay the small increase in price to keep printing. The truth is we’re a handful of regular old people scattered around the country. We have mortgages and drive crappy cars. Most of us have “day jobs” that not only supplement, but bring in the lion’s share of our income. We do Linux Journal because we love it. We love the people. We love the freedom. We love the penguin. If it were a matter of increasing prices a buck or two, we’d have done so. As the entire industry is showing, it’s a much, much bigger problem than that.

I kinda thought of all readers, ours would be the most understanding. And for the most part, they are. Linux people are smart people. The print magazine industry is dying, and either we adapt, or we just become a nostalgic part of history. We don’t want to move to a digital only platform, we must do so, or just pack up our toys and go home.

Thankfully, the majority of our subscribers are positive, if not bummed, about the change. Heck, we are too. We’re terrified that this “thing” we’ve come to love might not make it. We’re worried that people will just get angry and not buy the magazine anymore. We’re sad because we have no magic wand to make things all better. So, we will do all we know how to do: Create content. It’s what we’ve always done, and as long as we can find a place to write our stuff, it’s what we’ll continue to do. Hopefully we’ll thrive in this new digital age. It seems we are the right demographic to do so.

7 thoughts on “Linux Journal: It Bytes To Go To Bits”