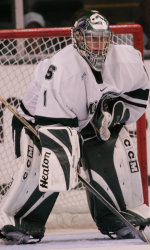 Yesterday, a really good friend let me use his wife’s season ticket and go to a Michigan vs Michigan State hockey game with him. (Yes, his wife approved) I’d never been to a hockey game before, so I planned to write about it. In fact, while I was there I was thinking about what I would mention.

5 minutes inside the Joe Louis Arena, I knew the focus of my post would be about the bathrooms. I didn’t take a picture, because, well, it’s the bathroom. Here’s the deal: at this multi-million dollar structure, where the Red Wings play and the Ice Capades do their capading, the bathrooms are like something out of a 1982 roller rink. There are long, bathtub-like troughs into which men stand and pee. Sword fighting not withstanding, it’s an odd experience. As I stood too close to the partially exposed man next to myself, I wondered WHY ON EARTH it was designed this way (the bathroom, not my… nevermind.) The space wasn’t more efficient, as only 3 men could write their names in the bathtub at a time, and each tub took the space of about 3 urinals. It was gross. No offense, but I don’t want to see another man’s urine “flow by” while I’m relieving myself. Add the drunken stupor of the 3rd period, and I was actually in danger of being splashed by a laughing, beer filled urinator. But I digress…

The game was actually the highlight (and most memorable part) of the evening. If you’re a hockey fan, and never seen a live game, you’re missing out. The rink was much smaller than it appears on TV, and you could see rich detail that looks so plain on the tube. The puck’s spinning, smacking, bouncing, and clunking make it seem so much more real. And yes, the body checks look more painful from 30 feet away.

I found myself jumping out of my seat when State scored, and shaking my fist right along with the masses during the fight song. That is SOOOOO not like me. The whole experience was quite surreal. I was excited to go, because I’d never done anything like it before, but it really exceeded my expectations. I actually want to see more college hockey! I want to get Dish Network so that I can see the games! (and the SciFi channel…)

Anyway, it was an awesome day. Thank you Terry and Maria, I’m sure it’s an experience I’d have never lived if not for your invite. GO STATE!!!