One of the stops we made on our recent vacation was at St. Augustine. It’s the oldest city in the country, or some such thing. Honestly, history really isn’t my thing — but it was also the first time I’ve ever seen the ocean. In fact, no one in my family had ever seen the ocean, so it was very special. 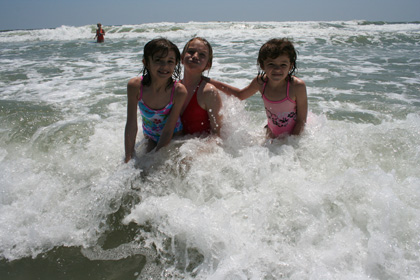 First off, the ocean is salty. Yeah, yeah, I know, that’s why they call it saltwater. But really, it is salty man! It’s not like, “Martha, your potato salad has a bit too much salt.”

It’s more like, “Hey look, I put my foot in the ocean. Now I have foot jerky.” It’s that bad. But enough about that.

I’ve lived in Northern Michigan for over half my life, and I’ve seen tons of lakes, rivers, ponds, streams, springs, etc, etc. After spending one morning at the ocean, however, I don’t think inland beaches are allowed to call themselves “beaches” anymore. There’s just no comparison.

One of my favorite CDs is that “sounds of the ocean” kind that is basically a recording of the ocean. I’ve never liked the ones that interject music into the mix — I like just the ocean sound. Much like a picture of pumpkin pie isn’t anywhere near as nice as tasting pumpkin pie, those CDs don’t do the ocean justice. The depth and intricacies of the crashing waves are really indescribable. I found myself lost in a paradise that seemed, even at the time, to be cliche. I lay there on the beach, with my straw hat over my face, and drifted away. It was like feeling the vastness of space. If infinity had a voice, it would be the ocean.