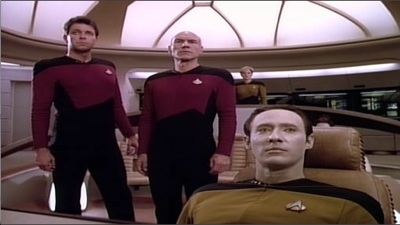 Look, you have a new 16×9 high definition television. I get it. So do I. There is something in us that WANTS to have every single, beautiful pixel filled with entertainment awesomeness. But here’s the deal — your 4×3 footage was never meant to be displayed like that. It’s just wrong. Picard did not have a head that fat.

I’ve had this discussion in real life, and people say they are annoyed by the black bars on the side of the television if they watch it in the native aspect ratio. These are (ironically) the same people that bought “fullscreen” DVDs because they didn’t like the black bars on the top and bottom of their old 4×3 televisions. Fullscreen DVDs are wrong. Stretched 4×3 video is even wronger. Just don’t do it, you make big screen TV people everywhere look bad.

Now go rent Star Trek the Next Generation, and watch it like it’s supposed to look. You won’t be sorry. 🙂

UPDATE: OMG, I see THIS on Engadget today. Can you imagine the insanity?!?!?!