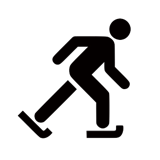 Tonight, the family and I went skating. (We’re not Canadian, so we haven’t been bred to ice skate and play hockey. I don’t mean that as in insult either, hockey is cool.) The rest of my family has been going for a while, and in fact everyone else owns their own skates. Daddy had to rent a pair. I do have one thing going for me, and that’s the fact that I’m fairly stupid brave. It was fun, but needless to say, I’m not a good skater.

Really, I only want to master a few things:

1) I’d like to stay vertical most of the time.

2) I want to do that cool “snowblower” looking thing that cool skaters do when they stop.

I’m surprisingly good at the first goal, and shockingly bad at the second. I can’t for the life of me figure out how people do that. It looks awesome, plus, the ability to stop is a bonus. Since I’m a geek, I’ll probably google how to skate, and try what I find next time.

14 thoughts on “Skating When You’re Not Canadian”