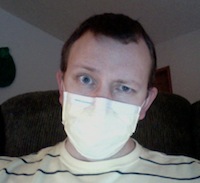 If you’ve been following me on Twitter, Facebook, or suchthelike, you most likely know that I’m absurdly sick. Today is the 13th day I’ve been bedridden, and it’s getting frustrating.

I started with what I think was Influenza (I say that instead of “Flu”, because the stomach flu is what most people call the “Flu”, and it’s really not the flu at all. The actual flu sucks.) About a week into my misery, I apparently contracted Walking Pneumonia. I went to the doctor, he gave me drugs, tested me, etc, and send me home.

Thankfully, on Monday, my fever broke. I figured that meant I was getting better, and while I still stayed in bed, I’ve been very optimistic. Since I still have a bad cough, aches, night sweats, (and a few other issues you don’t want to know about), I did go for a follow up exam today. I expected a pat on the back and assurance all was going well.

Yeah, not so much.

The doctor was under the impression I should be better. Not relatively speaking, but completely. Like, I should be all better. So, now I’m on an even stronger medicine, and on bed rest until next week when I see the doctor. Again. Since I’ve been really good about resting and drinking fluids at home (thank you for your support, family), I don’t have to go into the hospital or anything. So far.

So the lesson for the day? Apparently you can still be pretty sick even if you don’t have a fever. Go figure. And with that, it’s back into pajamas for me. 🙁

9 thoughts on “My Unfortunate Doctor Visit”