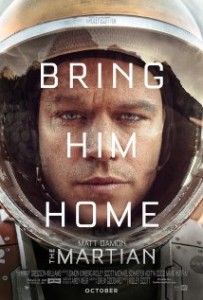 Most people who follow me on Twitter or Facebook (or know me in meatspace) are familiar with my excitement regarding, “The Martian” book and movie. I still think it’s my favorite book of all time. And that’s saying something. So how did the movie compare? Surprisingly well, and not surprisingly, it was less awesome than the book.

The casting was probably the best part of the movie adaptation. Matt Damon is an incredible actor, and his personality is perfect for the main character. The other characters are well cast too, but Damon really did Mark Watney (the main character) justice. The science, which was extremely accurate in the book, was a bit on the loosey-goosey side in the movie. This was normally not a big deal, but at least one scene left me slack-jawed and eye-rolling.

Even though the movie was 2 hours and 21 minutes long, there was a LOT left out. Like, a lot lot. Lot.

There were actually a few of the minor changes that I preferred over the book. Without adding spoilers, the ketchup scene and the ending space scene were awesome differences from the book. Will the changes, the focus on action over science, and the incredible acting make The Martian as popular as I hope? Probably not. It will be awesome if I’m wrong, but I worry it won’t inspire the passion for space exploration that I imagine. I’m not sure anything can quite inspire the passion we had in the 60s, but gosh I hope something does!

Lastly, two things: the 3D is very subtle and quite well done. If you don’t see it in 3D, you’re not missing anything important, but at the same time, the 3D does a good job of immersing you into the world as opposed to being gimmicky. Also, while the book has profanity out the wazoo, the movie is PG-13, and has very limited swearing. There are 2 F-bombs, which I think is the legal limit for PG-13 rating. There are some other cuss words, but it’s not obnoxious.

tl;dr version: GO SEE THIS MOVIE AND READ THIS BOOK. (but not at the same time)

1 thought on “The Martian Movie (A Quick Review)”