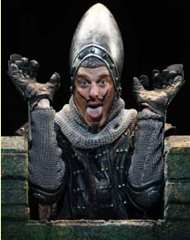 Today we took my oldest daughter to Urgent Care for pink eye. (She actually didn’t have pink eye, but it sure looked like it, and we didn’t want her to miss a day of school)

On the way home, Donna and our oldest were discussing the odd accent the Urgent Care doctor had. His name sounded Latino, but his accent almost sounded European. As Donna and I considered a Portuguese or other South American possibility, from the back seat, our 6 year old piped up. She said in the thickest, cheesiest, most “I can’t believe a 6 year old said that,” accent:

I laughed so hard I almost had to pull the car over. As a bonus, for the next few hours my entire family spoke with fake French accents. For some reason, mine came out as a woman’s voice. I’ll pretend it was on purpose.