I really hate memes, so I figured I’d tell you about my dog instead. To be honest, he’s probably more interesting than me anyway. So here ya go: 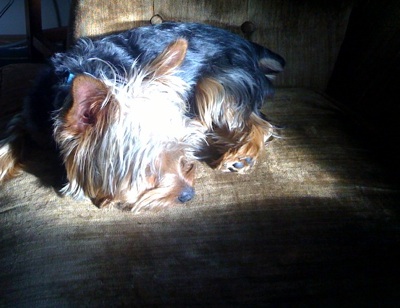 1. His name is Tux, but originally it was Fizz-Gig. It fit him well.

3. She reminds him of that when he tries to attack her.

4. His tail stub both creeps me out and fascinates me.

6. He needs his hair cut more often than I do.

7. He’s the runt in a litter where both parents were runts of their own litters. He’s a very tiny Silky Terrier.

8. He very rarely pees in the house anymore.

11. When his hair gets cut, and his eyes are again visible, it freaks me out. I think he stares at me on purpose.

12. He will eat things so gross I can’t write about them on my blog.

13. And then licks people’s faces.

14. When given a stuffed toy, he immediately disembowels it. So quickly in fact, that it’s a little unsettling.

15. When he was a puppy, the hair matted shut over his butt. It was one of the grossest dog experiences I’ve ever been a part of. We threw the scissors away.

17. He is really good at playing fetch.

19. His name is indeed from the Linux mascot Tux, but I never connect the two in my mind. I think that’s odd.

20. He really likes to lick people.

21. I really don’t like him to lick people, but he doesn’t really care what I think.

22. He’s absurdly ticklish, and if you tickle him while playing tug-o-war, he dances and growls in a most entertaining way.

23. When he eats kibble, he takes a mouthful from the dish in the kitchen, and carries it to the livingroom before eating it.

24. He never drinks from the toilet.