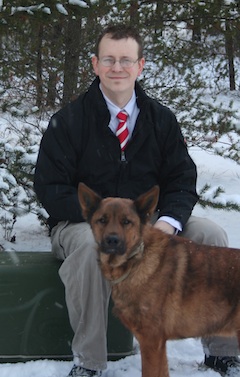 Yesterday, my family went to a local animal shelter to walk some dogs and pet some cats. As I walked “Taz”, an old dog with a mellow personality, I realized that I haven’t mourned the loss of Tigger. I want to tell you about Tigger, and while it won’t bring him back, perhaps it will help him to never be forgotten. And maybe, I’ll be able to get past his loss instead of just bottling it away inside.

I didn’t want a dog. Really. I didn’t want to housebreak a puppy, I didn’t want to worry about feeding and caring for a dog every day. I didn’t want to find a dog sitter every time we left town. Dogs were messy, stinky, hairy, and stressful. That day so many years ago when the girls were staring over the fence next to the church, and gawking at puppies, it was very clear to everyone we were NOT getting one. Still, puppies are cute, so I walked over to the pen myself in order to gather my girls and look at the clumsy little pups as all the kids from church reached through the fence to pet their noses.

When I got to the fence, I saw just what I expected. Sure enough, there were puppies gathered at the fence, stepping on each other to get closer to the children that were giving them affection (and possibly crumbs of cookie still stuck on their fingers from Sunday School.) What I didn’t expect to see was a puppy halfway to the fence laying spread eagle and wagging his stub of a tail, but not coming over to get scritched. I thought perhaps he was shy, or scared, or that he had just eaten so much food that he ran out of gas on the way over to the kids. Moments later, however, I saw the problem.

All the pups had slight neurological problems, and walked a bit more awkward than a normal clumsy puppy. I hadn’t noticed before, but realized it after looking for a while. This pup, however, was much much worse. He had spent the 15 minutes or so since church got out trying to get over to the fence, but had only made it halfway before collapsing from exhaustion. His back legs couldn’t quite support his weight, and try as he might, he never made it over to the giddy children. It was in that heartbreaking moment of realization that Tigger became my dog. Honestly, I didn’t even know it yet, but looking back — it was that moment.

I jumped the fence, decked out in my Sunday best, and walked over to the squirmy puppy. Since he was unable to walk, he was covered in mud (and probably other things), but I picked him up anyway. I wish I could describe the joy that little puppy showed when I picked him up. There are some amazing joyful times in life for people: The birth of a child, scoring the winning point in a game, marrying your spouse — but in the life of a dog, I don’t think it’s possible to be more happy than Tigger was at that moment.

I carried him out of the gate, over to our van, and into our lives.

Looking back, it seems like a rather bold move for me to make, introducing a dog, especially a crippled dog, into our house without talking to Donna about it. I don’t recall her ever questioning me though. We took him home, cleaned him up, and let him play in the front yard with the girls. It was that day he got his name. See, Tigger wasn’t strong enough to walk, but when he tried, his back legs would bounce his butt up and down. He didn’t walk, but he sure could bounce! Thus, Tigger was his name.

That summer proved to be quite challenging for Tigger. The vet told us he would probably never walk right. He had about a 3/4″ overbite, bad legs, he shook constantly, and had possible brain damage — but his brain didn’t appear to be swollen, and he wasn’t in any pain. The best we could do would be to walk him often and strengthen his back legs so he could get around.

Yes, house training a dog that can’t walk is a challenge. Thankfully, since he constantly shook, Tigger liked to sleep wedged between the couch and the wall to help hold still. We knew when to take him outside, because as he came out from behind the couch, he would bang against the wall as he tried to get up. “THUMP THUMP THUMP!” It was time to carry Tigger outside to do his business. 🙂

Every day we would walk and walk with Tigger. At first he would only make it to the end of the driveway before collapsing, but as days turned into weeks he was able to go for short walks. We’d generally walk him as far as we could get him to go, and then I’d carry him on the way back home. The bigger and stronger (and heavier and harder to carry!) he got, the further he was able to go. We started tying his leash to the stroller, and he would pull the girls along on our walk. It was good for him, and the girls though it was awesome. Summertime sled dog!

While he had a taste for garbage (not so much in his older years), and he liked tangling with skunks (actually more often the older he got), Tigger was the best dog I could ever imagine having. He spent almost a year sequestered from the family due to an undiagnosed thyroid problem, which caused a constant nasty skin infection. But his last days were spent with the freedom to roam around the house again. He lived longer than the vets ever expected, and almost fully overcame his leg problems. Tigger had a funny little limp when he ran, but he was able to run and play throughout most of his life.

Sadly, Tigger was in the house when it burned in January. When I opened the front door to search for the animals, I found him, already gone right by the front door. With all the grown up responsibilities, duties to perform, children to care for, home to provide — I’ve never really taken the time to think about Tigger. My dog. My friend. My loyal companion.

So Tigger, it breaks my heart that you’re gone. I’m so sorry I wasn’t there for you. And while your passing rips out my heart, I can honestly say that even though I’m typing this through the blur of tears — that look on your face when I picked you up after church all those years ago makes my pain bearable. Thanks for being there for me, when I didn’t even know I needed you.