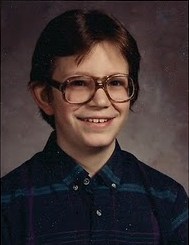 I know, it’s hard to believe, but this fine piece of 12 year old geek was single. Mind you, he had a TI-99/4A computer, a black and white television, and a laminated library card — but no woman could hold him down. In fact, it was so obvious to them, that none tried. 😀

I know they say size doesn’t matter, but just look at those glasses. Oh yeah. You know what I’m talking about. Homeslice could see the whole computer screen without moving his head. (Coincidentally, the computer screen at that point was that aforementioned black and white TV. Uh hu, we kicked it old school.)

How did I happen upon this glorious bit of the 80s you might ask? Well, that’s what happens when your Mom starts a blog. 🙂 So far there are no bathtub photos over there, but it’s probably just a matter of time.

12 thoughts on “That’s Right Ladies, He Was SINGLE”