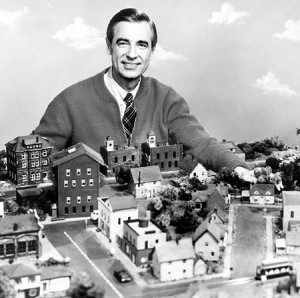 I look at the fast paced lives my kids are growing up in, and it makes me sad to realize that not only don’t they have the opportunity to watch Mr. Rogers’ Neighborhood, even if they did, they wouldn’t enjoy it. I honestly believe Fred Rogers did for several generations of kids something that parents, doctors, educators, and even PBS can’t seem to do anymore — make kids feel good about themselves. There are plenty of good, moral television shows available for children today, but none of them are capable of doing what Fred Rogers did with a little bit of kindness, a closet full of sweaters, and a whole lot of imagination.

To be honest, I don’t think it’s the fault of current television programs that they can’t accomplish the same thing Mr. Rogers did. Our media-soaked world is a different place, and for better or worse, lifestyles have changed. The thing that worries me, is that in our technology rich world, nothing seems to have taken the place of Mr. Rogers’ Neighborhood. Nothing has been able to speak to the past few generations in the same way a simple man with a soft voice and a kind heart did for so many years.

I’m almost 40 years old now, which is the same age Fred Rogers was when he started his television show. Yes, my mother raised me to be a decent young man, but I’d be lying if I didn’t admit how deeply Mr. Rogers affected the man I grew up to be. Heck, I’m probably a writer today because Mr. Rogers told me I could do it.

It sounds melodramatic, but I seriously worry about the kids who grew up with Power Rangers instead of Mr. McFeely and Queen Sara. Hopefully there is an equivalent positive force in the lives of recent generations that I’m simply not privy to. Hopefully with the speed up of our day to day lives, our youth have been able to slow down enough to care about people. Hopefully, they learned to make believe along the way, too.

Perhaps it’s because I grew up without a real father figure. Perhaps it’s because as a nerdy, introverted kid I spent more time in the land of make believe than other kids. Whatever the reason, Fred Rogers is a man I look up to. I admire what he did, I admire who he was, and in the back of my mind, I always try to live in a way that would make him proud of me. Mr. Rogers, I’ll say back to you your own words, “If only you could sense how important you are to the lives of those you meet; how important you can be to people you may never even dream of. There is something of yourself that you leave at every meeting with another person.”

Happy birthday, Mr. Rogers. You’re loved and missed. Thank you for caring about generations of children. You made the world a better place.

4 thoughts on “I Don’t Truly Admire Many People. Fred Rogers, I Do.”