For the first part of my life, I grew up in the ghetto of Detroit, in a single parent home. Mom and I were very poor. When I was 4 years old, however, I had to get glasses. Not just glasses, mind you, but Coke bottle thick welfare glasses. You can probably imagine that growing up, I wasn’t the most popular kid, and whether I admitted it or not, those nasty plastic glasses just killed my self image. My geeky brain and scrawny physique didn’t help either. 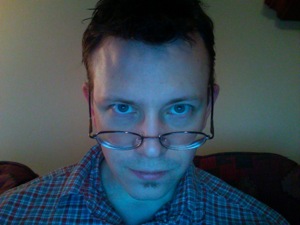 When I was in high school, I got a job, and saved up enough money to buy contacts. Since my 10th grade year, I’ve worn contact lenses, and over time, started to build a little self confidence. Heck, as a senior, I even had a girlfriend (my first), and now, 17 years later, I just celebrated my 12 year anniversary. I married a girl way out of my league — and things are going quite swimmingly. Then, today happened.

It started a few days ago when I played racquetball with a coworker. We are both old and out of shape, but that didn’t stop us from playing hard for almost 3 hours. Partway though one of the games, I got hit in the eyeball with that little blue bit of flying rubber. It didn’t really hurt, but my eye was bloodshot enough the next morning that I opted to wear my glasses instead of trying to get contact lenses in. I did the same today, because my eye was still irritated. Mind you, my glasses are no longer thick (ultrathin lenses), and are not welfare plastic (wire rimmed thank you very much), but still, I’m wearing glasses again.

My wife and I were in the store this evening purchasing a few gifts for the girls, and on the way out the van, I got pelted in the head with a snowball. Out of the blue. When I turned around, expecting to find one of my more childish friends laughing — I saw a group of college aged kids snickering and rushing inside as though they were innocent.

My reaction probably should have been along the lines of, “those darn kids.” In that moment, however, I was instantly transported back to middle school, and that group of college kids were the same ones that picked on the 4 eyed little geek on the playground. I instantly felt that same helpless, embarrassed, defeated, rage. The difference is that I’m a grown man, and a father. They say Hell hath no fury like a woman scorned. I would argue that Hell hath no fury like a parent seeing a child getting picked on. In some sort of weird, dual-role rage, I handed my packages to my wife, and RAN back into the store to, well, at that moment, to KILL those jerks. Thankfully, the tromp through the slush did calm me down a bit. When I got into the store, and yelled at the group, “Can I ask what THAT was for?!?!” They immediately scattered, and tried to pretend they didn’t hear me. That did not please me.

Basically, the scene ended as I chased down the 2 young adults that stayed together, and pretty much scared the ever loving dog doo doo out of them. I read them the riot act, and then went back to my car, unsure why I was SO angry. On the way home, I realized that I was angry because a group of bullies was picking on the little kid with glasses. This time, however, that little kid didn’t live in a home without a father figure. There was a Dad in the family, and he didn’t tolerate stuff like that. Yes it’s weird that I was both the little kid AND the Dad, but that’s how it went down.

I’m so thankful my own kids get to grow up with a father. And I’m even more thankful to be that father. And a note to the bullies? The Powers dad is one ornery SOB. Don’t mess with his kids.