In some more “pretty cool” stuff in my life, I just got confirmation that I’ll be a guest caller on, The Lab with Leo LaPorte, which I think is on G4 Tech TV. I have a question regarding the things to look for in a wireless microphone (for shooting my Linux Journal videos), and apparently it’s an interesting enough question that they want me to ask it on the show. 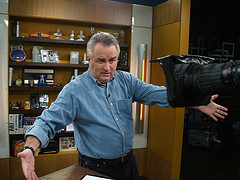 Here’s the problem: I’ve never seen the show, and I don’t have satellite TV, so I probably won’t be able to watch it before next week when I’m supposed to call in. So, cross your fingers for me that I won’t look like a moron. I’m going to try to find a way to watch an episode or two before next week, but I’m not sure I’ll be able to swing it. I might just have to wing it. 🙂