You know those people that live and die by their paper planner? When they lose it, life almost ceases to go on, and they run in circles like a bee with a pollen allergy?

I’m not one of those people.

You know those people that have a crackberry/palm pilot/iPhone strapped to their side, and if their batteries die, they do too?

I’m not one of those people either.

As it turns out, I’ve been trying to get organized for close to a decade now. For some reason, I can never quite get it when it comes to scheduling things. It’d be nice to claim I’m too creative for schedules, but not only would it be a lie — it would also just be a nice artsy fartsy excuse for my failure. I don’t want to be one of those people.

Now that I have 2 awesome jobs, scheduling is critical. You see, I also have an awesome family that deserves my time. (What did they do to deserve that you ask? Well, they fed me, now they’re stuck with me) My current attempt at organization is Google Calendar: 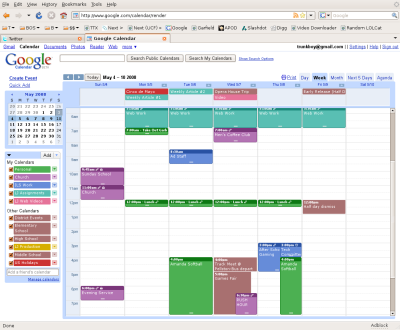 The advantage is that I can access it from any computer, and “syncing” is not required. I’ve tried the syncing game, and it always burns me. When I get a phone next month with a data plan, I should be able to access my calendar anywhere. This pleases me…

How do you stay organized?

21 thoughts on “Lack of Organiza…LOOK A PONY!”