My kids are selling pies for a school fundraiser for their choir/vocal class. (My two oldest are in choir, and are amazing, thanks for asking!) The cool part is, after orders are taken, the kids MAKE the pies themselves! What a neat idea, hats off to Hopkins Schools for a cool fundraiser.

If you want to buy one, we’ll do our best to get it to you. If you’re nearby, we’ll just deliver it. The further away you are, the more challenging delivery gets. If it requires freezing and dry ice to ship, we might have to share the shipping expenses. 🙂 (Note: I freely offer my pie eating services for those needing such services)

Anyway, the Apple Pie is $9, and the Blueberry Pie is $10.  Here are paypal links to send the money:

NOTE: I’m a moron and can’t make the paypal links work. If you want to use paypal, just send the money to paypal@brainofshawn.com with a link and a note as to which kind and what type you want. 🙂

Here is the official information: 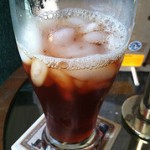 It’s simple, it’s delicious, it has the perfect amount of everything — and in some circles it’s sorta famous. Here is my iced tea recipe. You can substitute other teas, but I’ve tried MANY others, and PG Tips has just the right amount of tannin and a nice red color. Obviously you can tweak it if you want to (you know, if you like cruddy iced tea or something), but this is exactly how I do it: 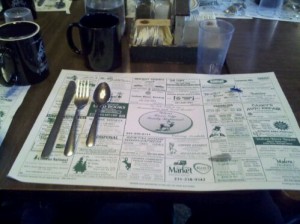 I’m currently sitting in a restaurant with my extended family, as one often does during the holiday season. They’re all eating. It’s not rude of them to be eating while I sit and stare at my empty placemat, because you see, they ordered soup and salad bar with their meal. I, did not.

It’s quite unsettling to have everyone else eating while I sip my ice water. Sure, I could snitch a crouton or two, but really it’s not the same. I could make a pterodactyl out of my placemat. Really. I make a mean paper pterodactyl. I worry it would be considered rude to start a craft project during the meal though. So, here I sit, blogging on my phone. It could be worse.

Here’s my holiday tip for those of you frequenting restaurants with your family: Order the salad bar. Really. Everyone else will, and you’ll be like me, alone with your phone. You’ll hope your meal comes soon, but you’ll realize the kitchen put your order on hold because everyone is eating salad. Happy Holidays everyone. May your weekend be full of food, and not paper pterodactyls. 😉

UPDATE: This blog post was eaten TWICE by the WordPress application for Android. Yes, I’m an idiot for expecting something different the second time I typed it on my phone… 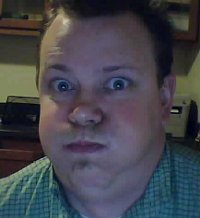 I’ve lost weight before. Lots of weight. In fact, over about 6 months, I lost 60 pounds. It was impressive. I felt great, looked great, and had the willpower of a hunk of granite.

This time, I’m not so great with the willpower. So I’ll give you some of the things I do to help curb my appetite. It’s not a diet plan, it’s not a 12 step program, just some things I do that help me lose weight.

When you eat a giant salad for lunch, you WILL be hungry at 2PM. You will NOT want more salad, and you’ll probably cave into bad snacks unless you have some good ones readily available. Have apples available. Or preferably, vegetables. Carrots are great. Yes, they are one of those “bad veggies” that are high in sugar, blah blah blah. You’ll never meet a person that is fat from carrot intake, trust me.

If plain carrots don’t light your fire, try dipping them in hummus. Hummus is magical food. It’s really great. I’d suggest making your own though, because the store bought stuff if loaded with olive oil. You can make it really low fat, and add stuff like taco seasoning for a really yummy carrot dip.

Yes, it’s terribly high in sodium. It’s not really cheap. For some reason, however, this low calorie drink seems to satisfy a “food” craving for me. Plus, if you get the spicy kind, it leaves your mouth feeling all hot and bothered, which makes other food not sound as appealing. If you are hungry for food, a small glass of warm or cold V-8 might make things all better for about 50 calories. It’s a caloric bargain.

This tip is often titled “eat smaller portions”, but I like my way better. Use a small plate, and allow yourself to go back for more. I like to use a really small plate (saucer size), and go back a couple times. I don’t feel guilty getting more food, and the time it takes to go back and forth allows your body to realize it’s full. Small plates are awesome.

Frozen veggies are often more healthy than fresh. I’m not making that up, it’s really true. If you eat green veggies (I like broccoli and peas) in mass quantities, it will fill you up with very little caloric regret. Plus there’s lots of fiber. I think that’s supposed to be good too. Be careful you don’t get frozen veggies with sauce already built in though. Like adding a bunch of salad dressing to a salad makes it unhealthy, sauces or butter on veggies negates the “low calorie” thing. I like to microwave an entire bag of frozen broccoli, put some seasonings on it (dry, no calorie), and eat the entire thing. Sometimes I’ll chase that with a half bag of frozen peas as well.

Another staple in diet tips, this one, for me, is simply a matter of physics. Drink a lot of water before eating, and you can’t cram as much stuff in. Yes, the water “goes away” quickly, but usually we overeat because we don’t give our bodies time to feel full. This helps a little. (It’s not magic though, I mean, it’s water, not food. Don’t expect too much.)

Tip 6: Beer and Wine are not Beverages

OK, they are. But pretend they’re not. If you like beer or wine (or hard liquor I guess), treat them like desserts, not beverages. If you by a 30 pack of Bud, and chug ’em down like water — you will get a beer gut. “Beer gut” isn’t a metaphor, it’s a huge belly from drinking too much beer. 🙂 Just because it’s not sweet doesn’t mean it’s not loaded with carbs. If you really like beer, get some expensive imports, so drinking one costs like $5-$6. You won’t chug 10 of them in a row, trust me. Same goes with wine. Sure, you can drink it with dinner, but don’t think of it as something you wash your food down with — think of it as a spice or something that adds to a meal. Have a glass of water on the table if you get thirsty, don’t gulp your wine.

It’s one day. Anyone that has tried to eat smart on Thanksgiving knows, it sucks. Enjoy yourself. If you want to try to be smart, eat slow. You’ll know when you’re stuffed before you have to unbutton your pants!

So there you go, Shawn’s tips for losing weight. Ask me in about 6 months if it worked again. I need to lose about 50 pounds this time, and I don’t have nearly the will power I did before. 🙂

I’m posted before about how wonderful McDonald’s Premium Roast coffee tastes. I’ve also expressed how that seems to go against everything that’s right in the universe. I mean, really good coffee? From McDonald’s??!?!?!. But alas, it’s true. 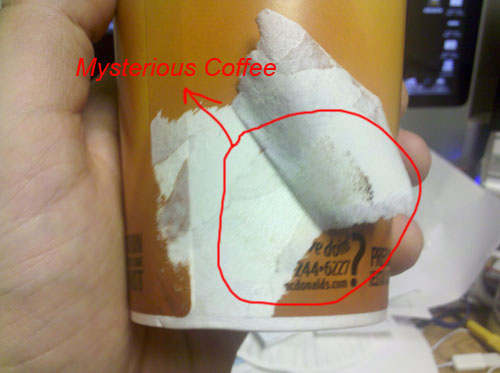 In the photo above, you’ll see that McDonald’s has taken a regular Styrofoam cup, and covered it with paper. Perhaps so no one realizes they are still using Styrofoam, since it’s so environmentally taboo? Who knows. Anyway, you’ll see the mysterious coffee that happens to be under the paper. Anyone who drinks McDonald’s coffee very often has had a cup drip from the bottom. It’s very frustrating because you don’t expect a drip from the bottom, and since it’s dripping from underneath the paper sheath — there is no way to stop the drip. It stains your pants, your shirt, your desk, your paperwork, etc.

How does the coffee get there you might ask? Well, the answer is physics. Look at the following photo:

What starts as a small imperfection in the top of the Styrofoam cup, turns into a physics dynamo, which pumps coffee directly from under the lid onto your pants. If the paper weren’t there, you’d get an occasional drip, which your thumb would catch, at which point you’d simply adjust the lid so it no longer leaks. Thanks to the paper coating, however, the drip is quietly and sinisterly absorbed into the paper. It then wicks all the way down the cup, and begins randomly dripping from around the entire bottom of the cup.

The first few months of this were maddening. I thought I just kept getting leaky cups. It turns out it was much more complex. So my only suggestion to fellow McDonald’s coffee drinkers? Drink fast. Wicking is relatively slow. And the most frustrating part? Throw the cup away after you’re finished. I tended to use my McDonald’s cup all day, to save on disposables. If you keep using the flawed design, the dripping gets worse and worse.

So there you have it, your lunchtime physics lesson. 🙂