Tomorrow is it. With all my crazy health problems of late, I haven’t done anywhere close to the fundraising I hoped to do, but regardless — tomorrow I’ll be golfing 50 holes. Again due to the health stuff, I haven’t been to a driving range, so my first golf swing attempt will be on the course tomorrow. Yikes. 🙂

What am I golfing for exactly? I’m glad you asked, even if you really didn’t. Hehehhe.

But tuition is so, so expensive for a private school. Even in our economically depressed area of northern Michigan, it’s not uncommon for tuition prices for Christian schools to hover around the $10,000 per year range. While in other parts of the country that is a paltry amount to pay for tuition at a private school, up here, it makes it unreachable for the majority of families.

Harbor Light does an incredible amount of fundraising. So much so, that for a top notch, parochial education, the base tuition is reduced to around $5,600 per student. PLUS, there are incentives (half off for the first year, things like that), scholarships, and tuition forgiveness that takes place every year. No one gets rich educating students at Harbor Light Christian School, but student’s lives are enriched beyond measure.

I could go on and on about the specific things HLCS does to benefit the community and world, but I’ll save that for another day. Giving families the ability to provide their children with a top notch academic education, while at the same time teaching them to exist peacefully and productively around others of differing world views is priceless. So, I agreed to participate in this golf marathon. My goal is/was to raise $1,500 to offset tuition prices next year. Again, due to my recent health concerns, I haven’t been able to beat the bushes for support, which is very unfortunate. If you’d like to contribute, even a small amount, I would be grateful. If you’re unable to contribute financially, please either pray for HLCS, or at the very least ponder how amazing it is to raise a generation of young Christians who understand how to get along with people of varying faith systems.

Here’s a link to my contribution page if you’re interested in donating. Thanks for reading. 🙂

I warned you I’d be posting about birds. 🙂

One of the problems with having BirdTopia so close to my office window, is that when I move, it scares the birds away. My solution for this was to buy one-way mirror film to put on my window. After installing it (a real pain, btw), I of course danced like an idiot to see if I could scare the birds. I could not.

The film makes it really hard to see, especially on a day like today, where it’s overcast and rainy. So I compromised: The bottom of the window is mirrored, so the window ledge birds can’t see inside. (The birds in the yard also can’t see Zoey stare longingly at them, since her head is window-sill high) Now it’s possible to sneak, but it’s also still possible to see the birdies clearly. Win/win? We’ll see. 🙂

Today is a brand new day. Well, ok, it’s not really brand new, it’s been around for a while as it’s after 2PM. Still, it’s the newest day we have. For me, that means moving past the last 3 months of horrible pain.

Mid June, I was a typical guy, and didn’t wait for any help when it came to loading our moving truck. I was the first to arrive at our rental, and so loaded the entire trailer by myself. Including furniture. This was stupid, and so the following week when I started having really bad pain in my, um, well, down there, I was fairly certain I’d given myself a hernia. Because apparently I’m not a spring chicken anymore.

The short version of the following 3 months is that I saw a doctor, a surgeon, a specialist, and basically no one knows what’s wrong with me. Two of the doctors insist I don’t have a hernia. One thinks I do. None of them can explain why I feel like I just got kicked between the legs by a mule pretty much all day, every day. If you’ve never been kicked between the legs by a mule, let me assure you, it’s something you’d like to move past rather quickly. Three months is not quickly.

So the specialist I saw yesterday told me to just wait and see. He thinks I’ll eventually heal, but doesn’t find anything he can treat. This is a good thing, because it means he didn’t find any cancer, tumors, baby aliens gestating in my groin, or other medically fixable stuff. The bad thing is that he can’t find anything to fix. Double edged sword. BUT, he told me I have no restrictions, and that I should just get on with my life. One doctor talked about pain management drugs, but I don’t want to be that guy if I can avoid it. So, brand new day. As of today, life should be treated as normal. If a decade and a half of migraines have done nothing else, it’s given me a fairly decent pain tolerance, so I’m just going to deal.

The office realm was a happy place. Mondays came, and Mondays went — but the supply of Monday repellant was always plentiful and hot.

But then one foul, foul day, something horrible happened. The Elixir of Promised Fridays disappeared!

Knowing the Office Realm could not survive under such dire circumstances, the king decided to hire a champion to protect his Office from the depression and despair of  an empty cup. The volunteers were many, but the king knew Sir Ibuprofen with the Paper Sword was his best bet against Monday’s onslaught. And so the knight was commissioned.

Unfortunately, while Sir Ibuprofen was indeed a valiant fighter, he could only battle evil every 6-8 hours. The king new he needed a champion able to take on enemy after enemy, without the required wait time Sir Ibuprofen demanded. And so, Lord Swingline took the post.

So the king hired a saber toothed stapler, not of noble blood, but far more vicious.

Unfortunately, the villagers called OSHA, and the king was required to post signage warning potential thieves of their certain peril.

Everyone laughed at the poor saber toothed stapler, and all his staples fell out. Now he lives in the kings bedchamber, and guards against slipper thieves and stocking bandits. The king needed a fierce warrior, and so he scoured the kingdom until he found a sword wielding pod person!

While a valiant warrior, Lord Podbiscuits annoyed the entire kingdom with his incessant singing. The king even suspected Podbiscuits of drinking the royal elixir, and so had him removed from office.

Sadly, shortly after the demise of Lord Podbiscuit, all the king’s champions were detained indefinitely by the TSA for attempting to get on a plane with Podbiscuit’s sword. Sir Ibuprofen also insisted he had to be taken on board with 6 ounces of water, and it is suspected the entire group is now in Guantanamo Bay.

Now the king mourns the loss of his champions, and fears for the safety of his realm. Without a hero to protect the Elixir of Promised Fridays, the king fears a curse of Forever Monday. Fearing for himself and his subjects, the king’s only choice is to pray to the chicken gods. (You know, like you do…)

If only there was a chicken strong enough to defend the realm. A chicken whose beak were sharp enough to pierce through the most sinister of evil, yet not be long enough to be considered a weapon by the TSA during kingly jaunts cross country. If such a noble bird existed, one such as Lady Gwenevieve Lockjaw of New Eggland, the realm would once again be safe from the onslaught Monday and all Monday’s henchmen.

The king sent his desperate plea to Queen Klishis of the Metal Birds, and to this day, he awaits her reply… 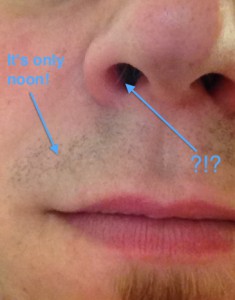 That’s how long it took before I had to shave my face every day. Since I know guys that had to shave at 12, I refuse to believe this revelation marks me as a “grown up” — I sincerely hope that day never comes. 🙂

For the record, I hate shaving. I’ve never really liked it, and apart from a 12 year old boy wanting to be manly, I think I’ve always been perfectly happy with my baby face. But that’s all gone now.

If you aren’t a member of the Hairy Face Cleaving Society, there are basically 3 ways to go: 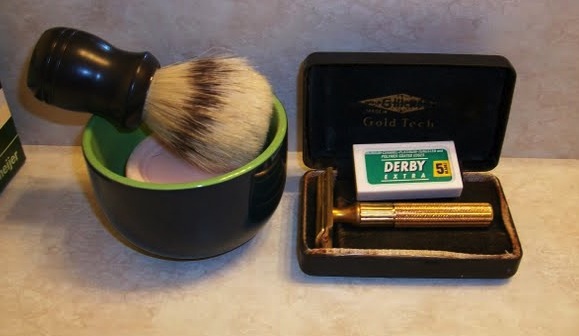 Truly, the third method is the best, and by far the cheapest. The only problem is that it takes a long time. It’s also difficult to get dressed and let out the dogs while shaving with a double-edged razor blade. Just sayin. Still, if you’ve ever wanted an amazing shave, follow the advice of my cooler-than-me friend Kyle, and try the old fashioned method. You won’t be sorry.